Why are You Standing There Staring? 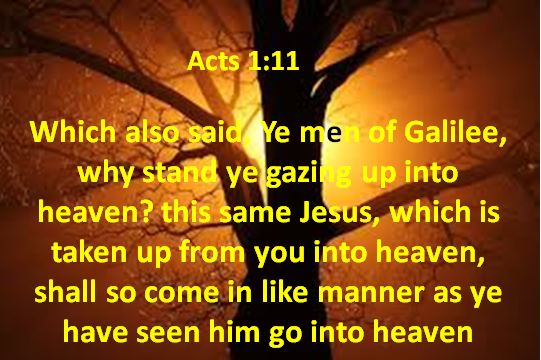 Acts 1:11 Which also said, Ye men of Galilee, why stand ye gazing up into heaven? this same Jesus, which is taken up from you into heaven, shall so come in like manner as ye have seen him go into heaven

In Acts 1:9-11 we see the story of Jesus’ Ascension into heaven after 40 days ministering on Earth after His Resurrection.  Jesus and His disciples had gone to The Mount of Olives, where they spent one last time together, talking and teaching. Here, the disciples had asked Jesus if this was the time when He would restore the Kingdom to Israel. His answer was interesting.

He simply replied that it was really not something they needed to worry about. It was not for them to “know the times or the seasons.” Then in Verse 8 of the passage, He made the promise of the power of the Holy Spirit to them and that they would later be His witnesses to the world.

Then they observed Jesus ascending physically, bodily into the skies until He was finally obscured by some clouds. As the disciples stood there staring(likely with their mouths hanging open), two angels appeared and issued the statement we see in Verse 11 of the text.

The question the angels asked seems important; they asked the disciples why they were just standing there gazing. Jesus had already told them what was coming. They were to return to and stay in Jerusalem. They were to await the empowering of the Holy Spirit. Finally, they were to go into the world and be His witnesses throughout their community and the world itself. They disciples had their marching orders, and those orders were not to stand there doing nothing and debating about His return.

The angels informed them that Jesus would return someday just as He left. Jesus himself had told them already the when of His return was of no importance to them.

There are takeaways for us here as well. Are we standing there staring up into heaven, so to speak? Are we so preoccupied with that and when it will be that we have forgotten we still have a mission to carry out here? We, too are to be His witnesses in “Jerusalem, and in all Judaea, and in Samaria, and unto the uttermost part of the earth.”

So, let’s quit staring into heaven and get busy!

The Resurrection Was the Message of the Apostles

At any time, one can turn on much of “Christian” television and see many messages being taught. We can learn how to save our marriages, how to save our teenagers, how to be successful in our jobs and can even learn how to become healthy and wealthy. Friends, there is nothing wrong with reading God’s Word and applying it to every aspect of our lives; there is no doubt that God inspired the writing of His Word so that we might use it to live positive and joyous lives. All of the above things are great, but they are NOT the central theme or the core of the Gospel message. That core remains the death, burial and resurrection of the Lord Jesus Christ!