First, let me caveat all that follows if I may. I am NOT a historian, and we won’t be covering anything not readily available from hundreds of sources. All I am is a guy doing some studying, writing some notes and thoughts, and sharing those with readers. Before we dive into the letters to each church, we are just going to review some of the cultural-historical backgrounds for each. As He did in His parables, Jesus often made reference to things based on the real situation in each location that would have instantly made sense to readers, and also help really illustrate the points He was trying to make with each.

Ephesus the city figured fairly prominently in both the Roman empire at the time, as well as in the early spread of the Christian churches in Asia Minor. As we covered earlier Ephesus received more note in Scripture than any of the other churches He dispatched letters to. 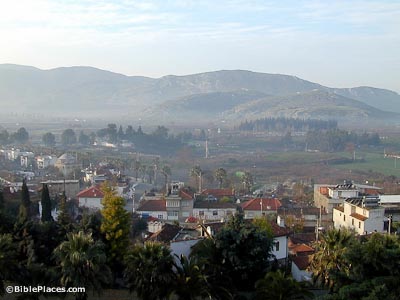 In the ancient world, Ephesus was a center of travel and commerce.  Situated on the Aegean Sea at the mouth of the Cayster River, the city was one of the greatest seaports of the ancient world.

Three major roads led from the seaport: one road went east towards Babylon via Laodicea, another to the north via Smyrna and a third south to the Meander Valley.

Considered one of the seven wonders of the ancient world, Ephesus’ Temple of Artemis was dedicated to the goddess of the hunt.  Only the foundation and one column remain of this temple which once measured 425 feet long, 220 feet wide, and 60 feet high.

Paul’s successful ministry in this city was considered a threat to this very temple (Acts 19:27). 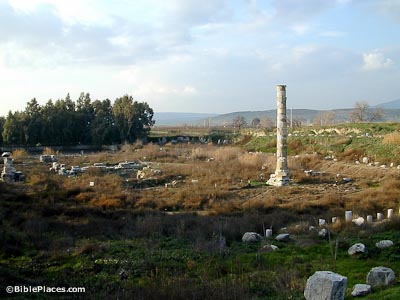 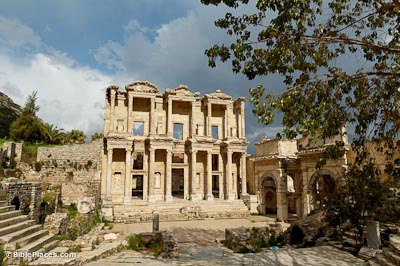 Originally built in AD 115-25, this restored facade is a highlight of the ruins today.  This style is believed to be the standard architectural form for Roman libraries.  The interior measures 70 by 80 feet and held approximately 15,000 scrolls.

This library was dedicated to Celsus the proconsul of Asia and his sarcophagus was located under the apse.

From the time of Augustus, these dwellings of wealthy Ephesians, were decorated with beautiful frescoes and mosaics. The houses had luxurious bedrooms, bathrooms, triclinium, and kitchens.

Built against the mountain south of Ephesus, the roof of one house forms the terrace for the house above it.  These houses were inhabited until the 7th century AD. 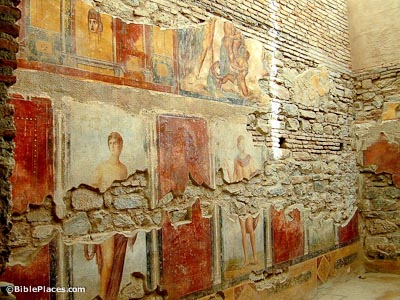 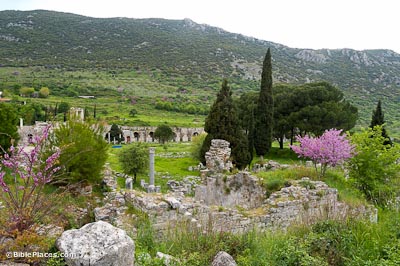 This market area is known as the “Square Agora” because of its dimensions 360 feet square.  It arose in the Hellenistic period and was surrounded on all sides by arched shops about 40 feet deep. It is located next to the harbor and was the city’s main commercial center.  It is quite possible that Paul worked here with Priscilla and Aquila in their tent-making business.

Originally holding 25,000 people, this theater was built in the Hellenistic period and was renovated by several Roman emperors.  Designed for theatrical performances, later alterations allowed gladiatorial contests to be held here.

When Paul was accused of hurting the Artemis and her temple, the mob gathered together in this theater (Acts 19:23-41). 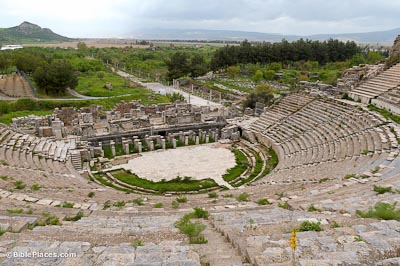 So, Ephesus was a big deal in Asia Minor during the time of early Christianity. As we have discussed, sending the letters to the churches made great logistical sense, as it was a major seaport, as well as an intersection for major trade routes through the Roman Province of Asia. This also is likely why the city and church were featured in Scripture so much, as apparently, Ephesus was the springboard for much of the evangelism of Asia Minor.

From the McArthur Study Bible

It is likely that the gospel was first brought to Ephesus by Priscilla and Aquila, an exceptionally gifted couple (see Acts 18:26) who were left there by Paul on his second missionary journey (Acts 18:18, 19). Located at the mouth of the Cayster River, on the east side of the Aegean Sea, the city of Ephesus was perhaps best known for its magnificent temple of Artemis, or Diana, one of the 7 wonders of the ancient world. It was also an important political, educational, and commercial center, ranking with Alexandria in Egypt, and Antioch of Pisidia, in southern Asia Minor.

The City of Ephesus

The fledgling church begun by Priscilla and Aquila was later firmly established by Paul on his third missionary journey (Acts 19) and was pastored by him for some 3 years. After Paul left, Timothy pastored the congregation for perhaps a year and a half, primarily to counter the false teaching of a few influential men (such as Hymenaeus and Alexander), who were probably elders in the congregation there (1 Tim. 1:3, 20). Because of those men, the church at Ephesus was plagued by “fables and endless genealogies” (1 Tim. 1:4) and by such ascetic and unscriptural ideas as the forbidding of marriage and abstaining from certain foods (1 Tim. 4:3). Although those false teachers did not rightly understand Scripture, they propounded their ungodly interpretations with confidence (1 Tim. 1:7), which produced in the church harmful “disputes rather than godly edification which is in faith” (1 Tim. 1:4). Thirty years or so later, Christ gave to the Apostle John a letter for this church indicating its people had left their first love for Him (Rev. 2:1–7).

There, wasn’t that lazy of me? Good info, though, and useful later I hope!