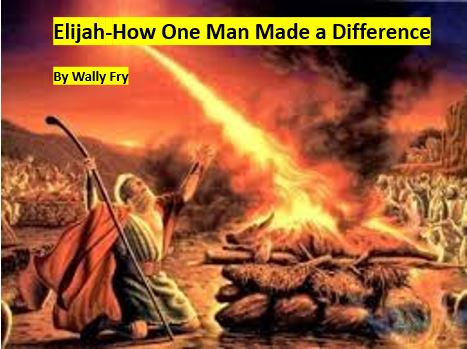 The Gauntlet Is Thrown Down

This is somewhat mistitled, to tell the truth. In reality, this gauntlet had been thrown down three years before when Elijah was first called to prophesy that drought would seize the land. As we discussed way back when, early in this series, the use of drought as a judgment was very intentional and pointed on The Lord’s part. One of Baal’s supposed roles was as the god of the storms. Baal was the subject of his worshipers concerning weather related issues. One of the main purposes of a drought specifically was to show who was really in charge around these parts!

As we will see later, this contest was to be set up in such a way as to further specifically illustrate just who the True God really was. The role of Baal as the god of storms, and the god of lightning and fire from the sky specifically would play a key role.

Let’s take a quick step back to an earlier installment before we continue. Remember how when Ahab and Elijah met that Ahab immediately blamed Elijah for his trouble? This challenge from Elijah was the answer. Elijah did not defend himself, he did not defend God. He simply focused ON God and on the person he was dealing with. That’s a good lesson for any of us.

Now Elijah makes his invitations. Who was invited? King Ahab of course. Also invited were the 450 prophets of Baal, Jezebel, and the 400 prophets of the goddess Asherah. (Note the lack of mention later of Jezebel and her prophets. It seems they declined the invitation!)

The first invitation seems the most notable, as Elijah invited all Israel to come to this showdown. Now, it’s not likely that every person in Israel was literally invited or instructed to be on Mount Carmel; likely it was a representation of the 12 tribes to hear and see what was about to occur.

Why Israel? Wasn’t the big showdown between Elijah, and Ahab and Jezebel? Wasn’t Ahab the problem? Not at all. Of course, as King, the people would tend to follow him, particularly in that day where the King’s power was absolute. But, then, as today, the people had free will; they had the ability to choose a different path than they did.

That hasn’t changed a bit. Even today, our leaders are not responsible for the choices what we, the people, make. It seems like we spend a lot of time complaining about the lack of, and praying for the restoration of, Godly men and women in leadership in this country. We should, as in fact we are commanded to pray for our leaders. But if every man and woman in office in this country was a staunch, Bible believing Christian, would anything really change? I say not a bit. Revival doesn’t start from the top and work its way down; Revival starts from the heart of one individual and works its way up.

So Ahab sent unto all the children of Israel, and gathered the prophets together unto mount Carmel. And Elijah came unto all the people, and said, How long halt ye between two opinions? if the LORD be God, follow him: but if Baal, then follow him. And the people answered him not a word.

What was the answer of the people? Complete silence; the people answered him not a word. Elijah asked a simple question, and not a person said a word in return. Why was this so? Maybe they were guilty; here we see a case of guilt shutting people up:

Romans 3:19 Now we know that what things soever the law saith, it saith to them who are under the law: that every mouth may be stopped, and all the world may become guilty before God.

Maybe they just didn’t know which way they planned to turn,  Perhaps they literally awaited the results of this contest to see which god was truly the more powerful. It really doesn’t matter why they didn’t speak, as the end result was the same.

They were limping back and forth between serving the God of Israel and the various gods of the day, particularly Baal. They wanted it both ways. They may have called themselves believers and children of  God in name, but had allegiance to neither totally. Later in God’s Word, James would cover this same issue when he told us:

James:1:8 A double minded man is unstable in all his ways.

Finally, we see in Israel people who did not want to choose; they wanted it both ways. Do we see that today? How many people in our nation today, if asked, would refer to themselves as Christian? Even today, the majority would identify themselves exactly as such. Yet, how many of these if OTHER people were asked, would be identified as Christians? Do we identify ourselves as Christian or are we KNOWN as Christian? Are we limping back and forth between worshiping Jesus Christ and our idols? Wait! You say, I don’t worship idols? Are we sure?

Of course most of us don’t head up on a mountain to worship Baal, or down the the groves to worship Asherah; our idols are different today. Nonetheless, they are there. What are our idols today? Well, if we classify an idol as anything we place in a place of higher importance in our lives than Jesus Christ, they are many! Money, jobs, our sinful lifestyles, sports, and our “stuff” are all things we place higher on our priority list than God. We, also, limp back and forth, thinking we can call ourselves Christian while keeping our toes in the pool of the world. We think we can call ourselves Christian, yet find ways to support and accommodate things clearly counter and in conflict with God’s Word: sexual sin of all varieties, the watering down of God’s Word to make it appealing, the teaching that Faith exists to improve our lives and make us wealthy and healthy; these are all things we limp back and forth between.

Do we want our nation to become revived? Then, we have to ask ourselves the same question that Elijah asked the children of Israel. Who will we serve today: The Lord or Baal?

It’s finally time for the big showdown! I use the term showdown very loosely, as we all know there was never really a showdown, don’t we? We know it, and Elijah knew it. Of course, God knew it as well. The end was decided, and only Ahab, the prophets of Baal, and the people of Israel had any doubts about who was going the be the victor here.

Elijah was ready. He had been shaped and formed over the course of three years and was fully prepared and willing to engage in this contest with the King, the prophets, and the idolatrous people. He even made it clear just how ready he was when he said to the people, I, even I only, remain a prophet of the LORD; but Baal’s prophets are four hundred and fifty men. Of course, he knew that was not true, as he was sell aware of the 100 prophets of God Obadiah had hidden away in caves. It seems that what we have here is a little hyperbole simply for illustrative purposes. What did this illustrate? it pretty clearly lays the ground work, that God doesn’t need large numbers to accomplish His work. God and one person is more powerful than all of the opposition that can be mustered.

Elijah goes even further to illustrate the point the God will prevail in this seemingly uneven contest. Put no fire under is used three times in this particular section of our story, and it seem notable. Being the god of weather and the storms also meant that one aspect of Baal was that of being the god of lighting. Surely the god of lightning could send fire from heaven to burn the sacrifice, right?

Choose you one bullock for yourselves, and dress it first; for ye are many; and call on the name of your gods, but put no fire under. Elijah made the contest yet further skewed towards his opposition, granting to the prophets of Baal not only the chance to go first in the contest, but to take all the time they needed to get their god to cooperate.

The rules have been established, the preparations made, and the “contest” is about to begin.

What do we see quite clearly here? Confidence is what see here. Elijah knew the outcome in advance, because he knew who was producing the outcome. He was more than willing to stack the deck against Himself, because he knew it did not matter. He had spent three long years talking with God, learning from God, and being prepared by God for just this very moment. Elijah KNEW. Not only did Elijah know, but he wanted the people of Israel to see clearly just who the true God was.

Are we that confident? We know the end of the story as well; God has told us what the end is, and God wins. We can know that just as confidentially as Elijah did as he went head to head with God’s enemies and also proclaimed God’s truth to those willing to listen. Today, in our nation, those two groups still exists: those who hate God and seek to destroy him, and those who are honestly seeking and willing to listen.

Are we ready for our mount Carmel?

elijah, elijah and the prohpets of baal, elijah brings the rain, elijah on mount carmel

Leave a Reply to Tim A. Cancel reply